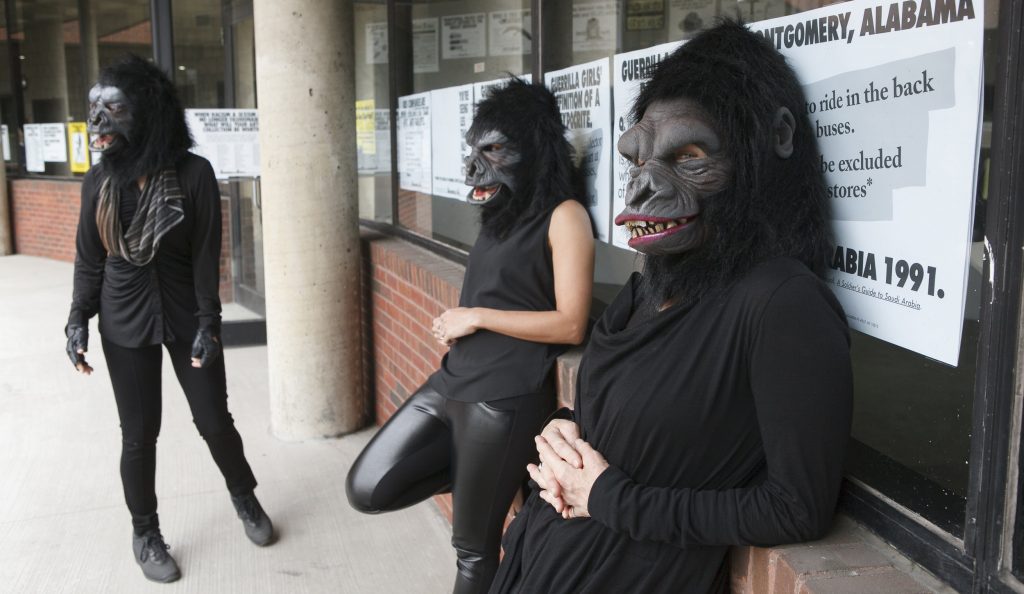 Guerrilla Girls artists Kathe Kollwitz, Zubeida Agha and Frida Kahlo during a press preview for an exhibition of works by the Guerrilla Girls titled “Not Ready To Make Nice: 30 Years And Still Counting,” at the Abrams Art Center, 466 Grand St, New York, NY on Thursday, April 30, 2015.  Photograph by Andrew Hinderaker.

Who are the Guerrilla Girls?

Every other artist we have talked about so far is just one person. The Guerrilla Girls are a group of women, but nobody knows who they really are. Each woman in the group takes the name of a famous woman artist and only appears in public wearing all black and a gorilla mask! They use art to draw attention to unequal treatment of women artists in museums, auction houses and the art world in general.

How the Guerrilla Girls Describe Themselves

The Guerrilla Girls are feminist activist artists. We wear gorilla masks in public and use facts, humor and outrageous visuals to expose gender and ethnic bias as well as corruption in politics, art, film, and pop culture. Our anonymity keeps the focus on the issues, and away from who we might be: we could be anyone and we are everywhere. We believe in an intersectional feminism that fights discrimination and supports human rights for all people and all genders.

Why a gorilla mask? One, to get attention, because people were ignoring women artists and two, because maybe some of them have important jobs at universities or museums, and they could get fired from their jobs if they were caught as Guerrilla Girls.

What does Guerrilla mean? Guerrilla warfare is a type of warfare that developed in the early 19th Century. It was also being used in South American in the 1980s (when the Guerrilla Girls formed). Small bands of rebel fighters were battling government forces, who had more soldiers and more weapons. Fighting using the “traditional rules of war,” wouldn’t have worked for those small bands of fighters.

They used what came to be known as guerrilla warfare methods, hiding in the jungle and using sneak attacks.

The Guerrilla Girls used the same concept – fighting for more inclusion of women artists in museums – but they realized the “traditional rules of war,” or getting attention, rights and inclusion, weren’t working. So they changed to fighting in a different way. They knew they couldn’t win by “playing by the rules,” so they made up their own rules.

They used the power of graphic design, plus research and facts and figures, to prove their points about how museums show way more art by men than women. And way more white men than anyone else, and the least amount of work by people of color and women of color.

This is one of their most famous pieces of art:

“Do Women Have to Be Naked to Get Into the Met. Museum?” Courtesy guerrillagirls.com

The Guerrilla Girls have been fighting for over 30 years. Things have gotten a little better in that time, but there’s still a long way to go. Their own art has even been displayed in museums, including the Smithsonian Institution in Washington, D.C.

Since all the women’s real identities are a secret, we can guess that sometimes one woman retires from her spot as a Guerrilla Girl and someone new takes her place as “Frida Kahlo” or “Georgia O’Keefe.” Whose name would you take, if you were a Guerrilla Girl?

What can you do to take on the fight of the Guerrilla Girls?

One thing you can do is to learn more about women artists. The National Museum of Women in the Arts, every year during Women’s History Month, they ask people on the street to name 5 women artists. Sadly, not many people can do it.

You could start by learning about 5 women artists, so that you can name 5, and then spread your excitement to more people! Tell others about women artists. If you’re assigned to write a paper about an artist in school, choose a woman. 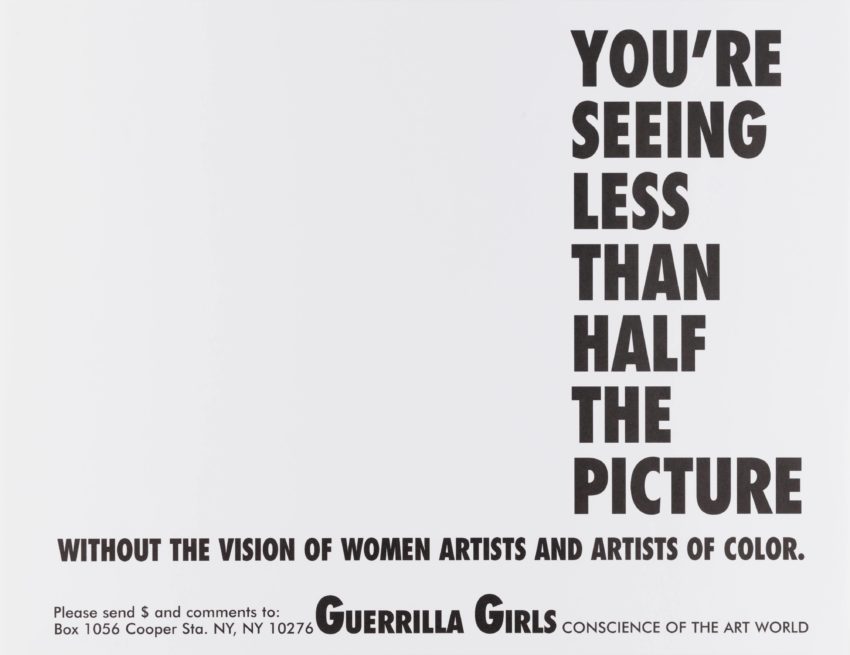 Seeing Less Than Half the Picture, graphic by the Guerrilla Girls

If you go to a museum and you see an unfair distribution of art – in other words, if there are more art works by men than women, and more by white people than people of color – speak up! You can write a letter or email to the head of that museum, or the curator who chose the art for that specific show!

Kids don’t often speak up, so sometimes, when they do, adults notice. Make your voice heard!