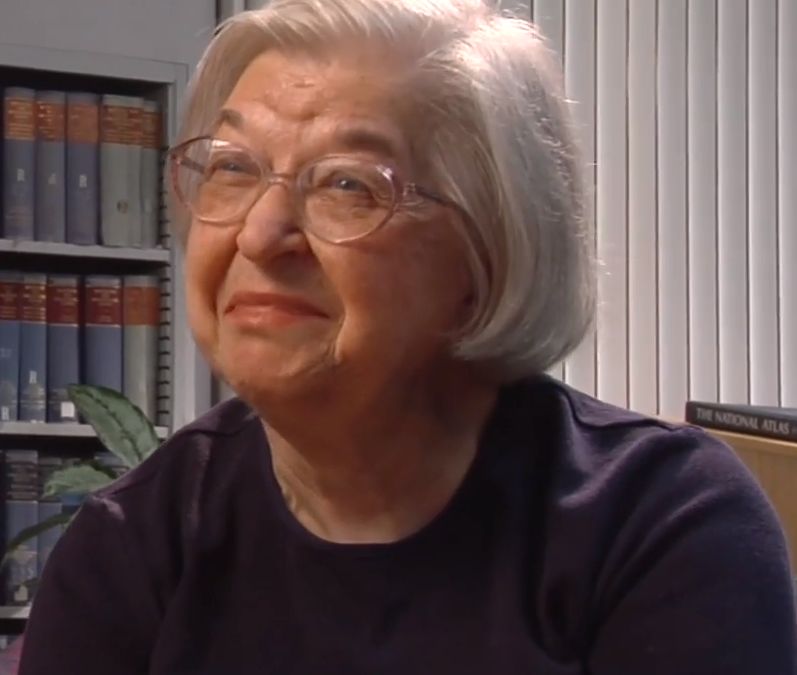 Here’s an amazing invention that you’ve seen on TV, even if you haven’t seen it in person. That’s Kevlar, have you heard of it? It’s what they use to make the bullet proof vests that protect police officers. They even use Kevlar to make bike tires that won’t go flat!

That’s not what Stephanie Kwolek was trying to invent when she was working in her science lab at DuPont in the 1960s, but she’s very happy she did.  “I don’t think there’s anything like saving someone’s life to bring you satisfaction and happiness.” (source: Science History Institute)

We’ve talked about inventors so far who never made a penny from their invention, about those who made a living from their work inventing (usually by selling or licensing their invention to a big company).  Now we’ll talk about another type of inventor:  the kind that does their inventing as an employee of a company.

When you work for a company and do inventing work, whether you’re inventing toys, or chemicals or machines, the company owns the rights to what you invent.  Does that sound fair?  The idea is that they’re paying you to think, and providing you with a laboratory or a workshop, so that you can come up with inventions that benefit the company.

Sometimes a scientist wouldn’t have access to the equipment and materials unless they worked for a company.  There are so many ways to be an inventor!

Today’s inventor, Stephanie Kwolek, didn’t set out to be an inventor, she wanted to be a doctor.  She didn’t have enough money to pay for medical school so she thought she’d get a job and save money for a while.  She got a job at DuPont, a big chemical company.  It turned out she loved being a chemist and decided to stay!

Lots of stories about inventions and scientific discovery in America are told as if they were miraculous discoveries, or accidents.  The scientist goes out to lunch comes back and has a eureka moment!

But the invention of Kevlar wasn’t like that at all.  It was kind of an assignment.  The company had asked Stephanie and others in her department at the lab to work on making a specific kind of molecule: a long chain molecule.

Her research in the lab was about making long chain molecules at low temperatures. Like all scientists, she worked rigorously and tested her results. When she tested her new material, it was so strong, she didn’t believe it at first. She was nervous about telling the scientists she worked with, in case she had made a mistake.

She tested it again and again, until she was really sure that what she had made was really strong and she could make it again from the same recipe. Scientists use repeatability to evaluate their experiments and inventions. Was it an accident, or can it be repeated by someone else, in another lab?

This was no accident. When she was ready to tell her co-workers, they were amazed too.

She was awarded a patent for Kevlar in 1965, though it took the company until 1971 to come up with commercial uses for it — meaning — things they could sell that were made out of it.

What’s So Special About Kevlar?

Bristol University’s chemistry department has some special web pages to help their students learn about chemistry.  Here’s what they say about Kevlar:

“Kevlar has some superb properties:

Unlike most plastics it does not melt: it’s reasonably good at withstanding temperatures and decomposes only at ~450°C (850°F).

Kevlar can be ignited but burning usually stops when the heat source is removed.

Very low temperatures have no effect on Kevlar. There is no appreciable embrittlement or degradation down to -196°C (-320°F), which makes it excellent for Arctic conditions.

Like other plastics, long exposure to ultraviolet light (in sunlight, for example) causes discoloration and some degradation of the fibers.

Kevlar can resist attacks from many different chemicals, though long exposure to strong acids or bases will degrade it over time.

Kevlar remains virtually unchanged after exposure to hot water for more than 200 days and its properties are virtually unaffected by moisture.

To put it another way, it’s stronger than steel, but weighs much less and doesn’t rust like steel does.

She was inducted into the National Inventors Hall of Fame in 1995, the fourth member to be inducted!  She was also awarded the National Medal of Technology, the Perkin Medal and the Lemelson-MIT Lifetime Achievement Award.

But my favorite use?  Bike tires.  We used to get a lot of flat tires on our bikes, which took a lot of time and money, we were always having to buy new tires.  We decided to pay extra to buy Kevlar bike tires and haven’t had a flat tire since!

We’re working on a podcast episode about Stephanie Kwolek and Kevlar and a video, in both, we’ll explain more about the science behind Kevlar and why it’s so strong and different!

Here’s a graphic by podcast co-host ScienceSean of what the Kevlar molecule looks like: 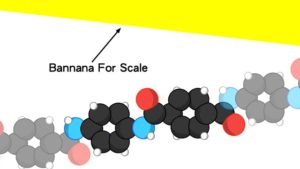 Graphic showing the long chain of a Kevlar molecule, drawn in the style of Snatoms brand molecular models.

Women Inventors Who Changed the World by Sandra Braun 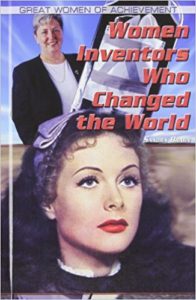 For teens and adults, try the book Patently Female: From AZT to TV Dinners by Ethlie Ann Vare and Greg Ptacek 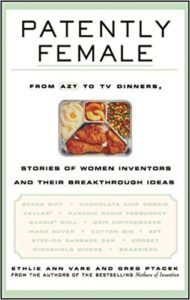 Stephanie said, “I was a very creative child. I watched my mother sewing and making patterns. I imitated what she did. I had all these paper dolls, and I remember just lying on the floor and drawing, making costumes for these paper dolls.” 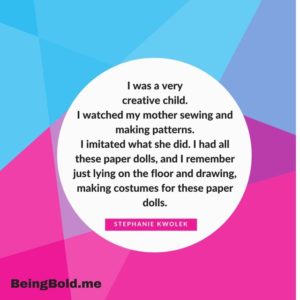 Kevlar is a registered trademark of DuPont.