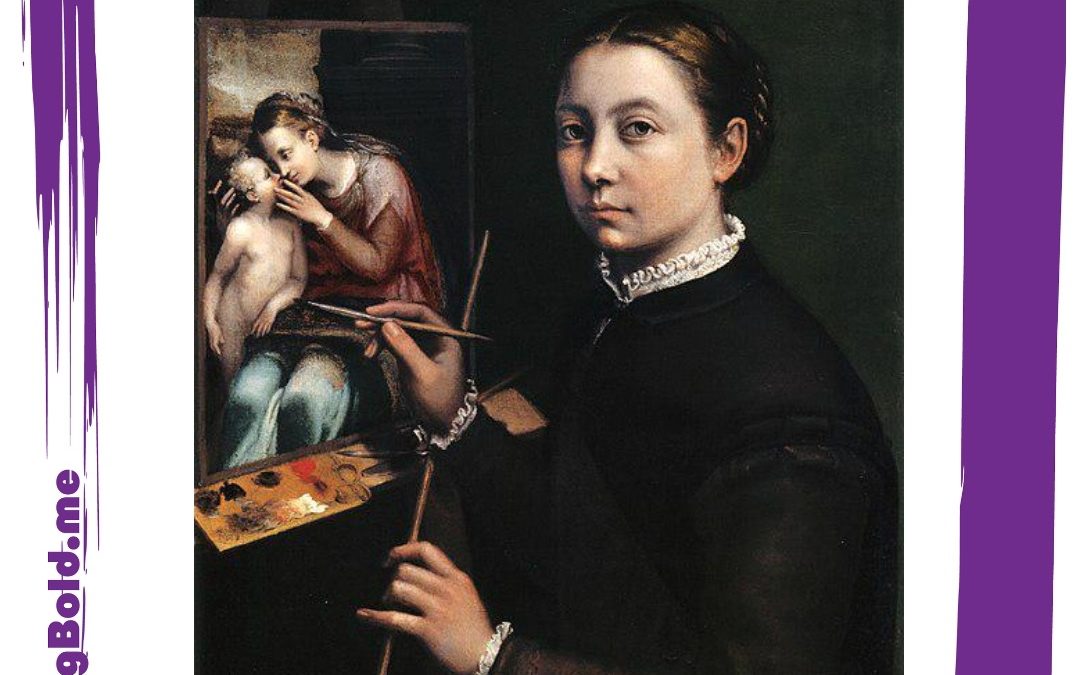 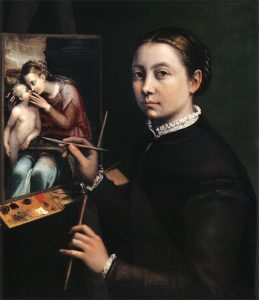 Sofanisba Anguissola was a portrait painter during the Italian Renaissance. (You may have heard of other Renaissance painters such as Artemesia Gentileschi, Michangelo and Leonardo DaVinci.)

She was born in 1532 in Cremona, Italy to a family of minor nobility. Her father, Amilcare, saw that all the children – all seven of them! – received a comprehensive education, including learning to read Latin and the arts, and “encouraged all of his children’s artistic pursuits,” according to the website of the National Museum of Women in the Arts. This was very unusual for girls, at the time.

In 1559, when she was in her 20s, was invited to the Spanish court by King Phillip II, where she painted portraits and taught Queen Isabella to paint. Stayed at court for 14 years. When she left, the king arranged for an appropriate noble marriage for her, and some sources say he even paid a dowry for her.

That husband died after six years and she remarried. Both husbands were supportive of her art career. She painted until she lost her eyesight, at which point she became a patron of the arts. She lived to be 93.

While at court, she painted mostly portraits in the court style, which is generally considered less interesting than her own style. Many of those paintings can be see in the Museo del Prado, in Madrid, Spain.

According to the National Museum of Women in the Arts:

“Like many artists of her time, both male and female, she used self-portraits as a kind of advertising about her skill.

Self-portraits convey more than just appearances—they affirm an artist’s identity. In the 16th and 17th centuries, women artists made portraits of themselves in their studios. Self-portraiture helped legitimize women as artists in a male-dominated profession.

Sofonisba Anguissola, Artemisia Gentileschi, and Judith Leyster presented themselves with confidence—they asserted and promoted themselves in eras when society rarely deemed that appropriate for women.”

According to the blog of the National Museum of Women in the Arts,

“In Anguissola’s Self Portrait at the Easel, the artist identifies herself with the Virgin Mary on her canvas. Both are women of virtue with a reserved demeanor and simple dress. However, Anguissola’s strong gaze meets that of the viewer. She carries herself proudly as she displays her painting-within-a-painting.

Anguissola adheres to society’s expectations of depicting women modestly, yet she boldly shows that she is also an artist with talents for both portraiture and religious scenes.”

What did others think of Sofonisba and her talent at the time? Professor Allen Farber of Oneonto College shares this quote about her teaching:

“One of her roles at court was to tutor the Queen in drawing and painting. An Italian visitor to the court in 1561 reported that “she [the Queen] has begun to paint, and Sofonisba of Cremona, who is her teacher, says…that she draws in charcoal in such a way that the person portrayed is immediately recognisable.”

Giorgio Vesari who wrote, Lives of the Artists, visited the Spanish court and wrote of Sofonisba in the 1568 edition of his book:

“She executed by herself very rare and very beautiful paintings; wherefore she well deserved that King Philip of Spain, having heard of her abilities and merits from the Duke of Alba, should have sent for her and had her conducted honorably to Spain, where he keeps her with a rich allowance in the Queen’s retinue, to the admiration of the whole court which admires Sofonisba’s excellence as something miraculous.”

Where can you see her art now?

Picturing Mary is at the National Museum of Women in the Arts in Washington, D.C.

Miniature Self-Portrait is at the Boston Museum of Fine Arts

Many paintings in the Prado, in Madrid, Spain.

A handy place to see many of her works all in one place, is a webpage by Professor Faber: http://employees.oneonta.edu/farberas/arth/arth200/artist/sofonisba.htm