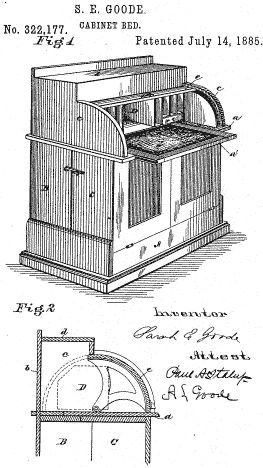 Patent drawing for the Cabinet Bed by Sarah E. Goode.

Sarah E. Goode (1855-1905) was the first African American woman to be awarded a U.S. Patent, for a cabinet bed, which would fold up during the day “so as to occupy less space, and made generally to resemble some article of furniture when so folded.”

Her patent was awarded in July, 1885. We don’t know much about her, but we do know that her husband owned a furniture store in Chicago, so maybe that’s where she planned to sell her invention.

If you search for her image online, you will find two very different images of her, but neither one of them is really her. Most likely, she never had her picture taken, or if she did, it is lost.