Ruth Asawa, Who Drew in the Air with Wire Sculpture 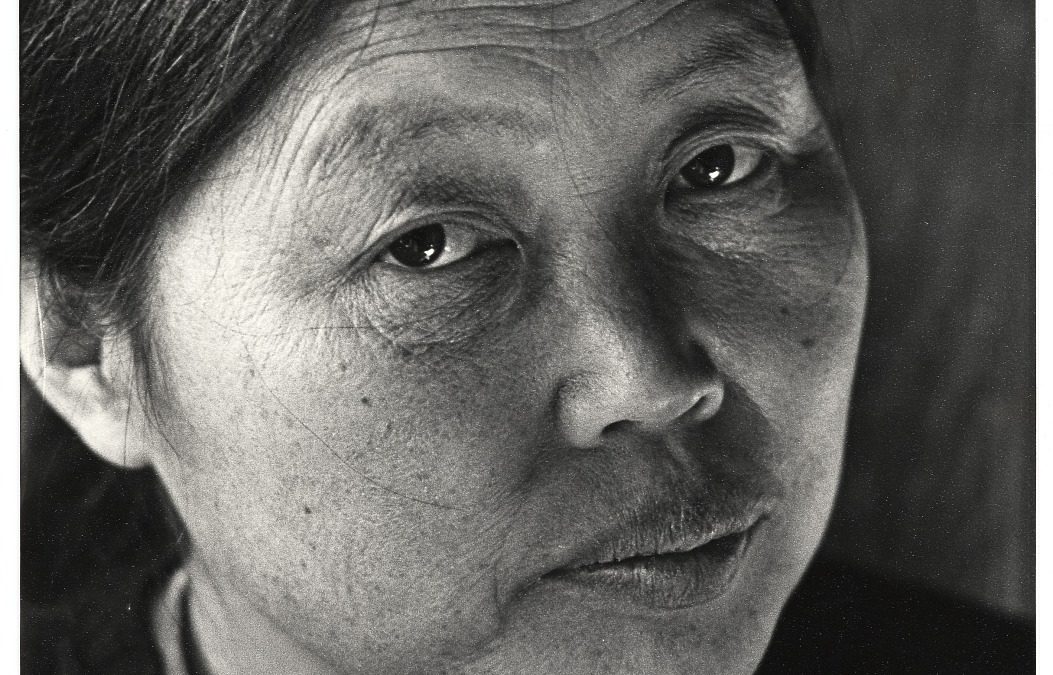 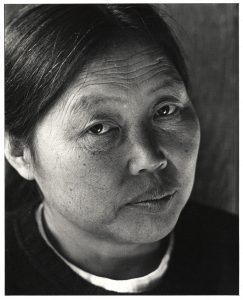 When you see a sculpture by Ruth Asawa, her amazing shapes created out of wire, you may experience a sense of awe and wonder, “how on earth are those made?” The shapes appear light weight, seem to float, or actually float, and are sometimes made up of shapes inside of other shapes. 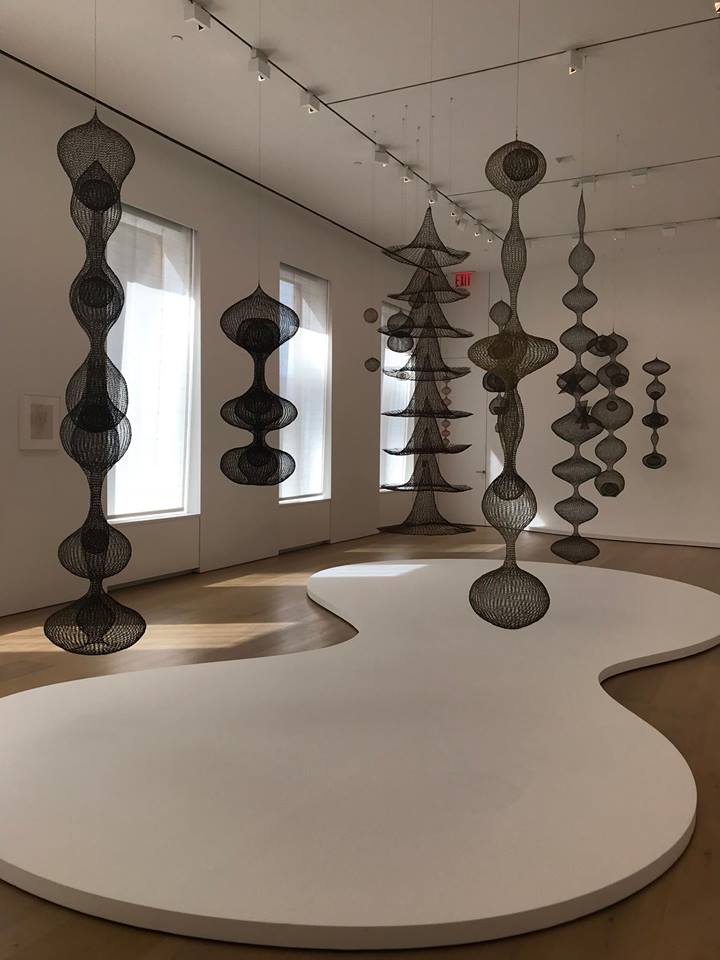 Various works by Ruth Asawa at the David Zwirner gallery in NYC.

In fact, her pieces are not light weight, they’re made out of galvanized steel wire, brass wire or iron wire. She was inspired by an insight that she made while looking at hand woven baskets she in Mexico on a trip there in 1947. Despite the inspiration coming from baskets, her sculptures were created with crochet techniques. Crocheter Kathryn Vercillo says of Asawa’s work, “They’re beautiful but you can’t always tell that they are crochet if you’re not familiar with her process, just because it’s tough to see those stitches sometimes when they are uniquely done in metalwork.”

While her work is sometimes referred to as woven, Asawa herself told The San Francisco Examiner newspaper in 1957 that the sculptures were made using the crochet technique.

Of what kind of wire she used, Asawa said, “We used whatever we had.”

The Early Life of Ruth Asawa

Ruth Asawa was born in California to parents who had emigrated there from Japan. She had six siblings. Her parents were farmers and due to discriminatory laws at the time, they were not allowed to become citizens or buy land in California.

“On the farm, she is often given solitary tasks because she is quick to argue. She enjoys working alone because it allows her to daydream.” (Source: https://ruthasawa.com/life)

In 1942, Asawa and her family were sent to internment camps. Her father was arrested by the FBI in February 1942 and taken to a Justice Department Camp in New Mexico. Ruth did not see him again until 1948. Ruth, her mother and siblings were taken and interned first at the Santa Anita Racetrack, where they had to live in a horse stable for six months. “The smell of horse dung never left the place the entire time we were there.” (Source: https://ruthasawa.com/life) While there, she learned to draw from Japanese-American animators who had worked for the Walt Disney Company.

From there, she and her family were moved to a more permanent camp in Arkansas. (Most white Americans who have heard of these camps call them Internment Camps. Many Japanese Americans call them Concentration Camps. The American citizens of Japanese decent who were kept in the camps were prisoners and not allowed to leave.)

The camp in Arkansas was surrounded by barbed wire and had eight watchtowers. Eight thousand Japanese Americans were interned there. While living there, completed high school, where she was the art editor of the yearbook. 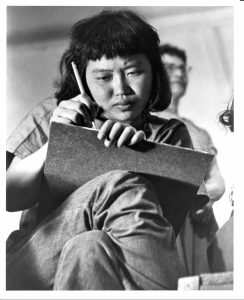 A teacher in the camp encouraged her to go to college, and she got a scholarship from the Quakers which made it possible for her to attend college in Wisconsin, where she studied to be a teacher. She was unable to become a teacher though, discrimination and outright hostility toward Japanese-Americans made it impossible for her to complete her student teaching.

From Wisconsin, she traveled to North Carolina, where she attended Black Mountain College, an experimental college and community. She started out planning only to spend one summer there, but ended up staying for a little over three years. The community and people there had a profound influence on her life and art and she also met her future husband there. He was Albert Lanier, an architect. He was white and both of their families were against the marriage. They decided to move to San Francisco, California, a city where they feel they will be more accepted.

It was during her time at Black Mountain College that she went to Mexico one summer on a service trip with the Quakers to teach drawing. There she saw a Mexican technique of making baskets that led to her creative leap and her new art form. Upon her return she began crocheting in wire to make her forms.  Here is one of the early bowl forms she made after returning from Mexico. 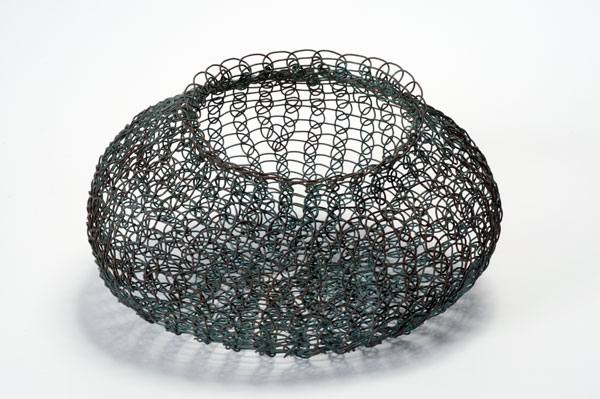 She didn’t start with a plan, when she made her sculptures, but would start to crochet and see what evolved. What evolved was a series of amazing shapes, with shapes inside of shapes. And she accomplished it all, including having her art shown in museums, while raising 6 children!

Her husband Albert said of their decision to have 6 children that Ruth felt that once you had 3, you might as well have 6! 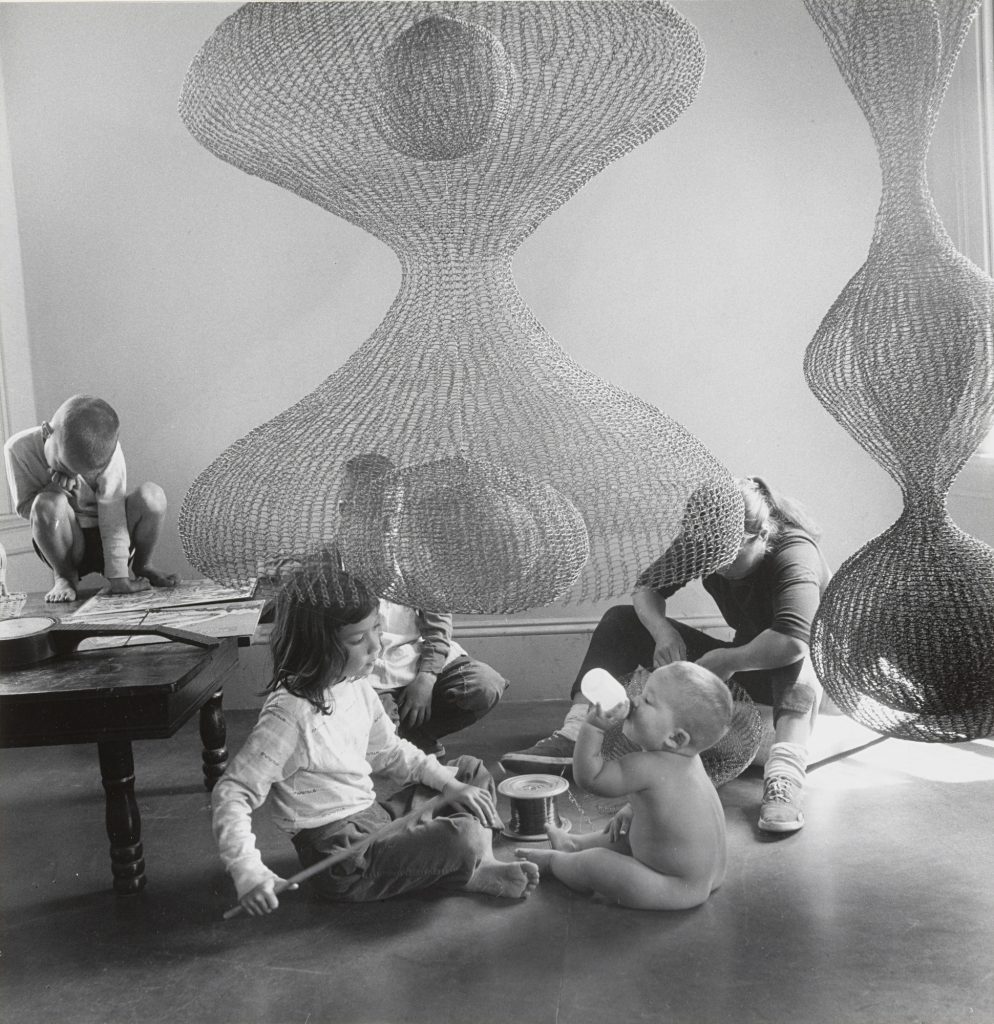 Ruth Asawa at Work with Children, 1957, Photo by Imogene Cunningham.

Andrea’s Fountain is also known as the Mermaid Fountain and it includes one mermaid who is breastfeeding her merbaby!

A high school in San Francisco named in her honor in 2010, but it wasn’t just any high school, it was the very public high school of the arts that she helped to create!

For more about Ruth Asawa, see her official website RuthAsawa.com.

Timeline of her life is here: https://ruthasawa.com/life

The Sculpture of Ruth Asawa, Contours in the Air by Daniell Cornell, et al

To learn how to do textile methods with metal, see the book Textile Techniques in Metal, by Arlene Fisch.

There are also some children’s picture books out about Ruth Asawa, check your local library! 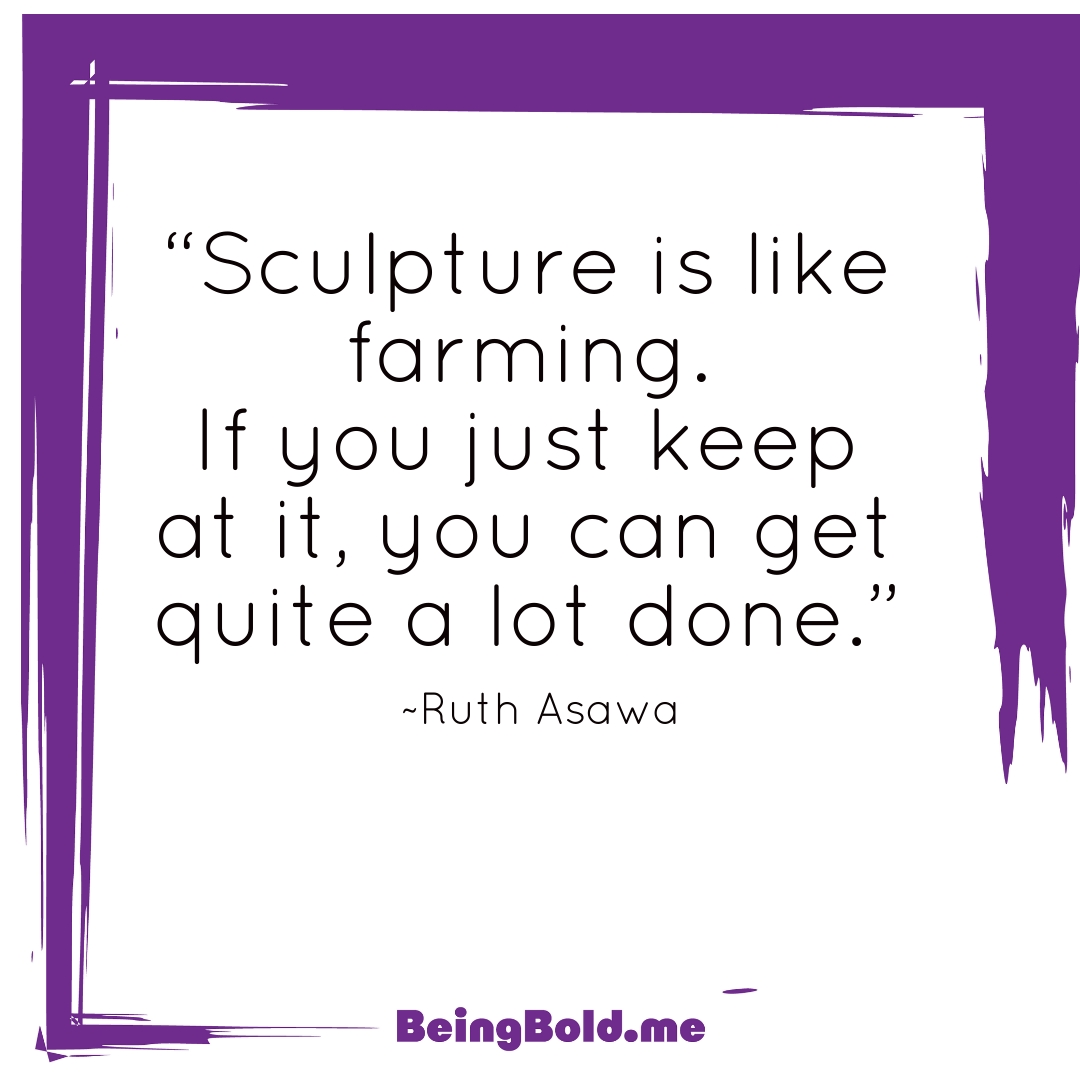