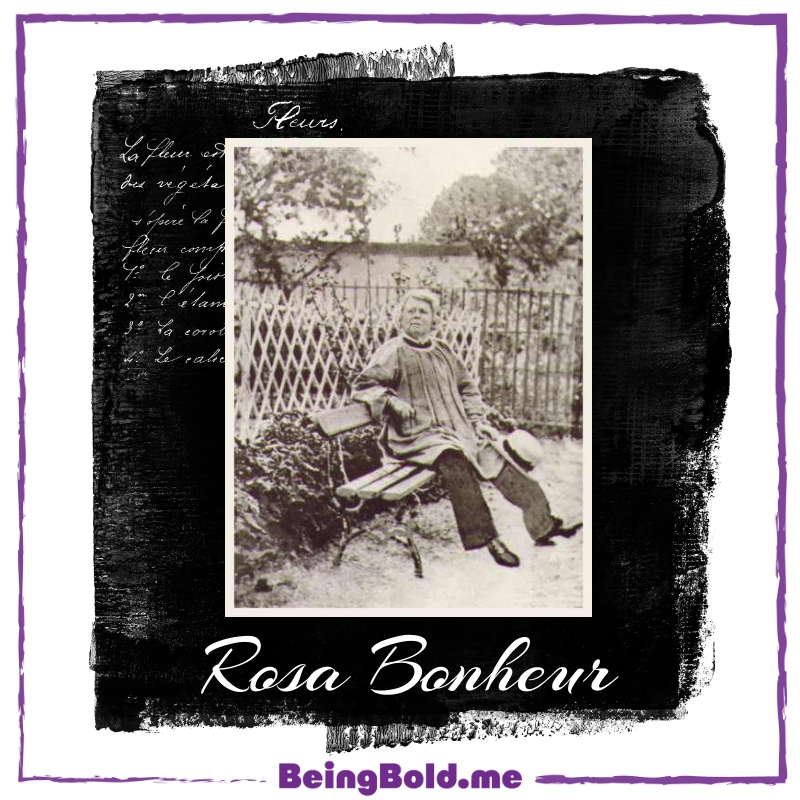 Artist Rosa Bonheur, on a bench and wearing trousers.

Imagine you’re going to walk out into pastures to draw horses and sheep from life, or to the slaughter house, to see what the muscles of animals look like under the skin (better to paint them) but you have to do it in a long skirt, that brushes the ground.

A long skirt would pick up dust, dirty, an um, worse, while in the fields with animals, and there’s a lot of blood on the ground on the slaughter house.

Artist Rosa Bonheur faced just that problem with skirts. But the problem was, it was illegal in Paris to wear pants. Unless you got permission from the police. So she did!

Here’s an image of the actual permit she got to allow her to wear pants, wait, no, the permit actually says she has permission to “dress like a man!” 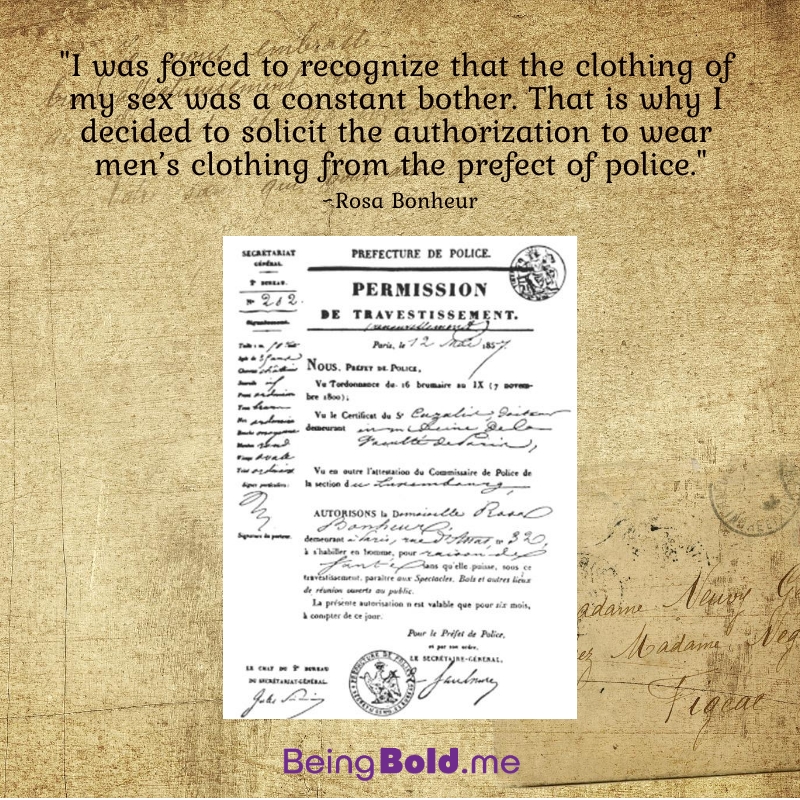 Here’s what she had to say about it:

“I was forced to recognize that the clothing of my sex was a constant bother. That is why I decided to solicit the authorization to wear men’s clothing from the prefect of police.”

Rosa Bonheur, who was born in 1822, was incredibly famous and successful in her lifetime, and even had a painting commissioned by the Empress Eugénie of France. That painting was Sheep by the Sea. 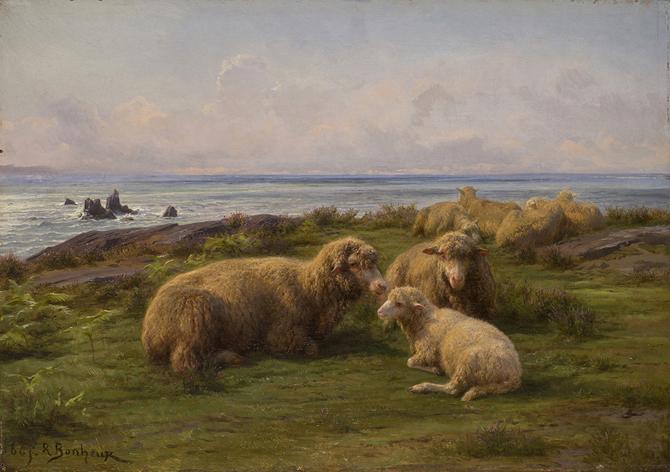 Sheep by the Sea by Rosa Bonheur, painted in 1865. Oil painting on cradled board.

Why Did Rosa Bonheur Paint Animals?

In order to paint people accurately, you had to be able to draw people “from life,” (that means, from a living person, modeling for you), and you needed to draw that person when they were naked, so you could really see the muscles and how they moved and what they looked like.

Have you ever seen a really old painting, where the person just has a big, draping robe, and you really can’t tell what their body is like under that robe, or if they have one at all?

But in the Renaissance, people started to paint in a more realistic way, so that the clothes really look like they’re on a real person.

You can see the problem this caused for Rosa Bonheur. Her solution was to paint animals. They’re always dressed, so to speak, in their fur or wool. There was no controversy.

She was amazingly talented as an animal painter. Here’s one of her most famous paintings, The Horse Fair. 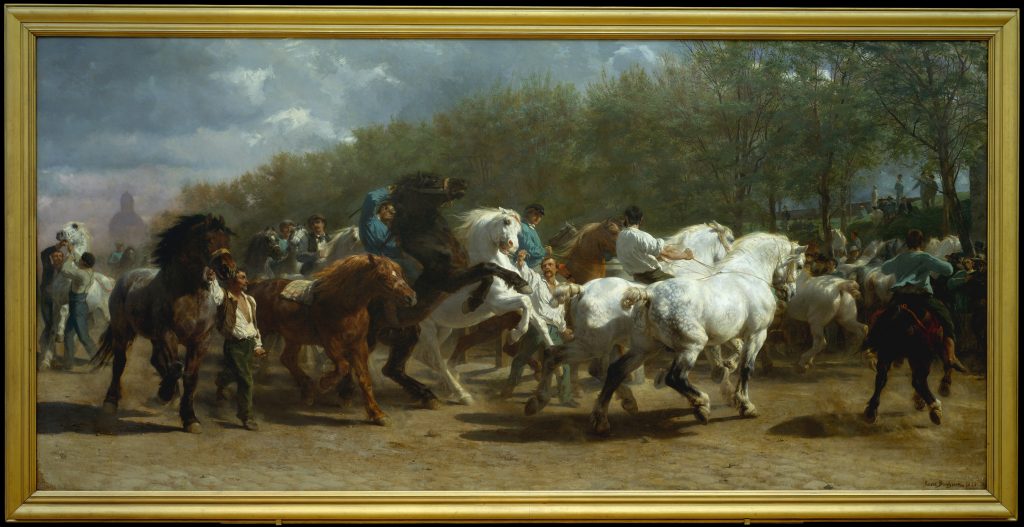 She worked on The Horse Fair for year and a half, visiting a horse market in Paris twice a week to sketch the horses. The finished painting was exhibited at the Paris Salon of 1853, where it was widely praised.

A copy of this painting was in the classroom when my grandmother was a little girl. There were only two prints of paintings, and this was one of them! (I can’t remember what the other one was, but it was something super famous, such as The Last Supper by Leonardo DaVinci.)

Like most of the early women artists, Rosa was trained by her father, who was also an artist. Her first public exhibition of her work was when she was 19, when she showed oil paintings of rabbits and goats.

Here’s what she said about studying animals:

“To perfect myself in the study of nature I spent whole days in the Roule slaughterhouse. One must be greatly devoted to art to stand the sight of such horrors…Providence sent me a protector…I was thus enabled to work undisturbed.”

She was awarded the Legion of Honor in 1865. And she was promoted to the level of “Officer of the Order” in 1894. This was the first time the award was ever given to a female artist.

Where You Can See Paintings by Rosa Bonheur

National Museum of Women in the Arts, in Washington, D.C.

The Metropolitan Museum of Art, in New York, New York

And her former home, outside of Paris, is now a museum.  It’s called the Musée Nationale du Chateau de Fountainebleau, France

“A beloved figure, in 1865 Bonheur was awarded the Legion of Honor for her acclaimed work, and is widely considered the most influential woman artist of the nineteenth century.”

She’s a fascinating person and artist and I’ve just scratched the surface here!  I haven’t even told you about the pet lions she kept!  My goal with these posts is to spark your interest!  I hope that you head to the library to learn more!

P.S. You won’t believe this – it was still illegal for women to wear pants in Paris, France until 2014!!! By that time, no one was enforcing the law, but a woman named Najat Vallaud-Belkacem, (France’s minister of women’s rights) thought it was a good idea to make it official, and she did. Thank you, Ms. Vallaud-Belkacem!

P.P.S. Here’s something I learned while researching this article – there was a Rosa Bonheur doll made during her lifetime! It features her characteristic short hair, and striped pants! Here’s a link to a picture: https://www.worthpoint.com/worthopedia/antique-rosa-bonheur-pairan-doll-1870-1822940143