Lost and Found: Edmonia Lewis and the Death of Cleopatra 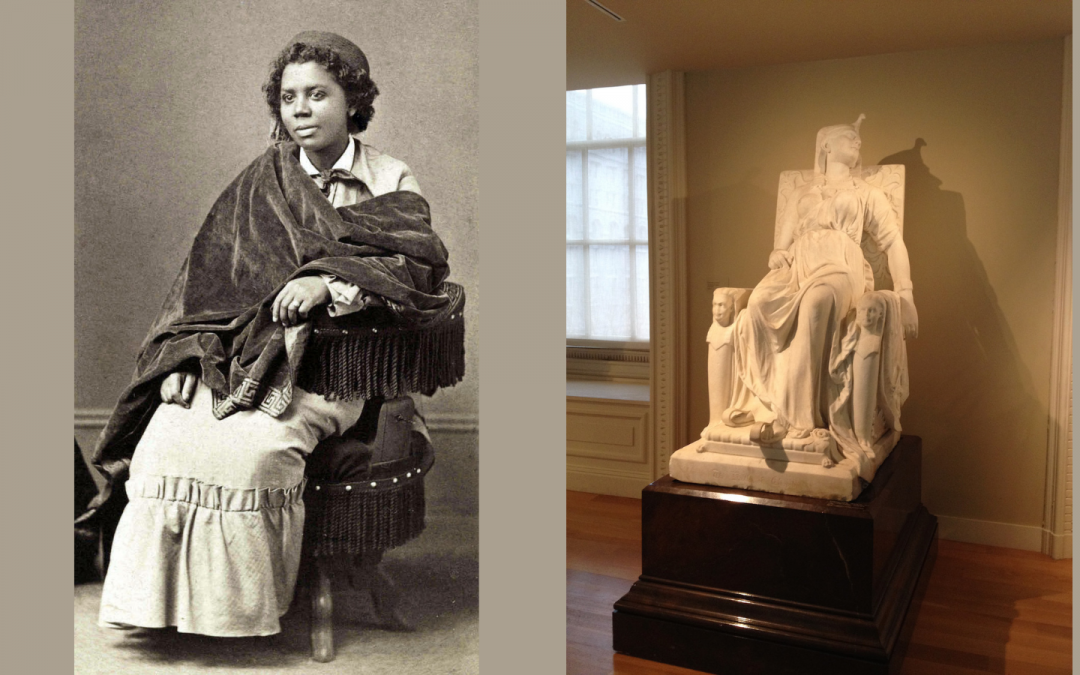 This article is for parents, other adults, or advanced kid readers. (If you’re new here, you may not know that many of our posts are written for kids!)

Edmonia “Lewis’s best-known work in her lifetime was the Death of Cleopatra, a twelve-foot tall sculpture weighing two tons that took four years to execute.  Exhibited at the 1876 Centennial, Cleopatra was called ‘the grandest statute in the exposition.’  Today it is many of her lost works.”  (Heller, Women Artists, page 87)

Except it’s not lost, it’s in the Smithsonian Museum of American Art, on the 3rd floor, I went there and saw it myself.  The road from Rome, where Edmonia Lewis, an African-American and Native American sculptor born in 1844 (or 45) carved Cleopatra, to Washington, D.C.’s Smithsonian Museum of American Art was a long and winding path.  A path that includes Boy Scouts, house paint, and a recalcitrant historical society president.

Mary Edmonia Lewis confronted institutional significant barriers in her lifetime, the same kind that have kept many women from becoming professional artists throughout history.  She was among the first black students to be admitted to Oberlin College, in 1859, though she was prevented from graduating.

Her patrons were abolitionists, who provided the necessary letters of introduction for her to obtain training, such as when she moved to Boston in 1864 and studied under Edward A. Brackett.

Edmonia Lewis Moves to Rome and Carves The Death of Cleopatra

Later, abolitionists again served as her patrons, assisting in the sale of her works.  Her bust of Robert Gould Shaw was so popular that she was able to sell enough copies to fund her move to  Italy, where she joined an expatriate community of women artists in Rome known as the White Marmorean Flock.

In a New York Times article in 1878, Lewis was quoted as saying,

“I was practically driven to Rome in order to obtain the opportunities for art culture, and to find a social atmosphere where I was not constantly reminded of my color.  The land of liberty had no room for a colored sculptor.” (p. 18, Buick)

Extensive letters and writings from Lydia Maria Child, both public and private, show her frustration with Lewis’s habit of making a work and then attempting to find a buyer for it, instead of the securing commissions in advance, according to research by author Kirsten Pai Buick, reported in her book, Child of the Fire.

As was her wont, Lewis carved the monumental Cleopatra without a commission, working on it for 4 years.  Her rendering of Cleopatra differs from other sculptures of the same subject matter by male sculptors.  The more traditional way to depict this moment, is to show Cleopatra at the moment of deciding to take her own life, or recently dead but looking like she just drifted off to sleep.

Lewis’s depiction of Cleopatra is to show her defiant in death, a powerful queen, choosing the means and time of her death, according to Buick.

The U.S. government paid for transporting Lewis and the 12 ton Cleopatra to the Philadelphia Centennial Exposition in 1876, where it was well received, but did not receive any awards, probably due to the race of the sculptor and the racism of the time.  The heavy sculpture was next exhibited in Chicago in 1878, but again, there were no buyers.

Edmonia Lewis placed Cleopatra in storage in Chicago and returned to Rome.  Late in her life, the neoclassical style in which she worked fell out of favor and she had difficulty selling her work.   It seems that she couldn’t keep up with the payments on the storage of Cleopatra and somehow, Cleopatra ended up in a saloon on south Clark Street in Chicago.  The bar was owned by “Blind John” Condon.

Blind John also owned a horse racing track, along with some friends, the track, the Harlem Race Track, was in the then far out suburb of Harlem (now Forest Park).

John had a favorite horse named Cleopatra.  When Cleopatra the horse died, John Condon had her buried right on the grounds of the race track, using Edmonia Lewis’s great work, The Death of Cleopatra, as her headstone.  So beloved was this horse, that Condon had it written into the deed of the land, that when it was sold, neither the grave nor the headstone could be moved.

The racetrack was sold in 1911 and next became a golf course, it was then sold to the U.S. Navy and then the U.S. Post Office.  They disregarded this deed restriction and Cleopatra was put into postal surplus in 1972.

At some point, Cleopatra was moved to a scrap yard in nearby Cicero, Illinois, where she sat outside the door of the office.

And there she sat, in the wind and the rain and the freezing Chicago winters, as no sculpture of Carrera marble is meant to do, until one day in the 1980s, retired Cicero fire fighter Harold Adams saw her and said, ” ‘Believe me, I’m just a simple layman. but the minute I saw her, I knew that statue was something beautiful. She was like a big white ghost lying out there between all that heavy machinery and crying out to be saved.’ “  (Chicago Tribune, June 20, 1988)

Here’s where the Boy Scouts come in.  The fire inspector was also a Boy Scout leader.  Wouldn’t it be a great service project to fix up this sculpture?

They chipped away some marble from the back of the sculpture, mixed it with glue (epoxy) and made “repairs” to the areas of the sculpture that had been worn away by the elements.

The boys also painted Cleopatra with latex house paint.  While this seems abhorrent, according to Forest Park writer and local historian, John Rice, this paint actually helped hold the sculpture together until she got to a proper conservator.

Cleopatra was given to the Historical Society of Forest Park in 1985, according to an article on the Smithsonian website.  and the Forest Park Review, June 22, 1988.

It was determined that the sculpture belonged in Forest Park was given to the Historical Society of Forest Park in 1985.  No one believed that more firmly than then historical society president, Dr. Frank Orland.

He was thrilled to have back this glorious piece of Forest Park history and determined to use it to bring tourists to town.

We know already that he lost it, since the sculpture is now in the Smithsonian, but he didn’t give it up easily.  The fight to get Cleopatra to the Smithsonian took eight long years, during which art historian Marilyn Richardson told the Chicago Tribune, (June 20, 1988)  `”I don’t doubt his (Orland’s) sincerity,” Richardson said. “It’s just that he looks at Cleopatra as part of Forest Park history. Somehow, somebody’s got to make him realize that sculpture is more than that. It’s a priceless part of every American’s artistic heritage.”

At long last, in 1994 Dr. Orland released The Death of Cleopatra and the Smithsonian undertook $30,000 worth of restoration work.

If you visit Washington, D.C., be sure to stop at the Smithsonian Museum of American Art, go up to the third floor and visit this amazing masterwork of a sculptor who triumphed over adversity, as did Cleopatra.  If you remember to take a look at the label, which says, “Gift of the Historical Society of Forest Park, Illinois.”

Child of the Fire, by Kirstin https://www.dukeupress.edu/child-of-the-fire

Presentation at the Forest Park Library by John Rice, December 2015

A version of this article was published in 2017 on the website Moore Women Artists.