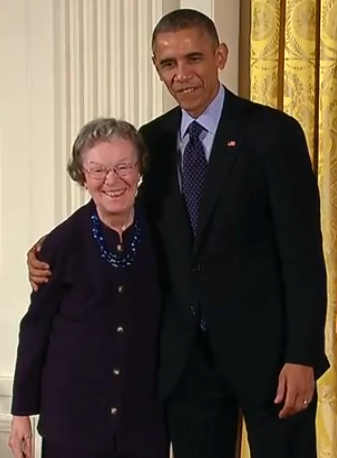 Do you like gemstones? Maybe you do, and you like green ones, such as emeralds. But good emeralds, with the really nice shade of green, and not too many inclusions are really expensive. Did you know that a woman chemist came up with a way to make synthetic emeralds? (she is credited as the co-inventor.)

Synthetic emeralds aren’t just green glass or something that LOOKS like emerald, a synthetic gemstone has all the same chemical and optical properties as its natural counterpart. Synthetic gemstones usually cost less to buy than natural gemstones, or the kind that we dig up out of the earth.

Though her emeralds have been used in jewelry, their more important work is probably that they were used in lasers, in the early years of that invention. (Synthetic gemstones have lots of uses, including in old fashioned analog watches, maybe your dad or grandfather has one, if you could see inside of it, you might see very small synthetic gemstones that help it run.)

Edith became a chemist in 1952, which was a very unusual time for women to enter the science fields. They were actively discouraged from studying science! Edith was inspired by her chemistry teacher in high school to study chemistry. She said, “She really made it exciting. We did hands-on laboratory work … and I think I fell in love with … chemistry at that time.” (Source: Lemelson link below.)

And that must have been a really good teacher, because Edith’s two sisters also became chemists!

While emeralds are a fun invention, and also practical, for watches and lasers, Edith is more famous for her invention of molecular sieves.

Have you heard the word sieve before? Maybe you’ve heard it in the kitchen, it’s another word for a strainer, like you would use to strain the water from the pasta when you cook it.

So if you take a guess, you’d probably guess that molecular sieves are for straining, or sorting molecules. And you’d be right!

A particular category of these, called molecular sieve zeolites are used in all kinds of things including producing oxygen for portable oxygen units (for people who need help breathing), to make gas for our cars from crude oil and they’re even found in laundry detergents! (In detergents, they replace phosphates which we discovered are bad for the environment.)

Edith retired in 1994, but not before winning lots of awards, including the $100,000.00 MIT Lemelson award and then in 2014, she was awarded the National Medal of Technology by President Obama.

Engineering.com says, “However unknown she may be to the general public, Edith Flanigen is deservedly a living legend to research chemists world-wide.”

Source of the quote above: https://www.engineering.com/Library/ArticlesPage/tabid/85/ArticleID/20/categoryId/5/Edith-Flanigen.aspx