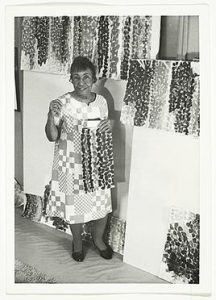 If you can name one abstract painter, he’s probably a man. But women painted abstractly too, and in fact the first artist to achieve abstraction in a painting was a woman, artist Lee Krasner.

Sometimes it may seem like only men were abstract painters, but it’s not true. There are and were many woman who painted in this new style that developed after World War II.

A realistic painting is one where you can tell what it’s a picture of. That was the only style of painting for centuries.

Then, in the 1900s, people started to look at the world, and the purpose of art and painting differently.

“Why paint in a representational way, when photography exists now?”

For that reason and others, artists all over the world started to paint in a way that expressed more feeling in their art. The Fauves painted things in colors to indicate feelings.

Artists also felt weighed down by all the art history, particularly the Futurists of Italy. They literally threw art into the river. They wanted a fresh start. They wanted art to be new.

Paintings became less and less realistic. Some artists painted their dreams, or things that seemed dream-like. These were the Surrealists. Others painted in a style where they “abstracted” reality. Things were distorted, such as work by the cubists, but you could still tell what the things in the painting were. (most of the time.)

As artists “abstracted” more and more, eventually, they got to the point where they said, why do I need to start with a tree and then abstract it? Why don’t I just start with a color? Or a shape? Or some lines?

Some abstract artists even stopped using paint brushes. Helen Frankenthaler used un-primed (or “raw”) canvas and stained it with paint. Other painters just flung or dripped painting onto the canvas.

Okay, so now that we know something about abstraction, we can talk about Alma Thomas!

Alma Thomas first started painting realistically, but in 1966, she exhibited her first abstract work, at the age of 75! She had been taking classes at Howard University and her professor encouraged her to try working in an abstract style.

Alma had worked as a teacher for 35 years, teaching art to junior high school students in Washington, D.C. After she retired, she was able to devote herself to her art full time and she developed the style she is known for today.

Some of her paintings look like they’re made out of little torn pieces of paper, don’t they? But they’re not, they’re paintings made with acrylic paint and sometimes, some India ink too.

You’ll notice that most of her paintings name a real thing, an eclipse, a specific type of flower. So she was doing abstract art, of the kind where she started from a real thing and then abstracted it, or simplified it. Often she simplified things down to primarily color.

In some of her paintings, you can sort of see what the painting is of, such as “Apollo 12 Splash Down,” painted in 1970. Other times, if she didn’t indicate to you, in the title of the work, what it’s a painting of, you might not know.

According to the <strong>National Museum of Women in the Arts</strong>, “Thomas became an important role model for women, African Americans, and older artists. She was the first African American woman to have a solo exhibition at New York’s Whitney Museum of American Art, and she exhibited her paintings at the White House three times.

You can see her work online and in person at the National Museum of Women in the Arts and the Smithsonian Museum of African American History and Culture.

During the presidency of Barak Obama, a painting by Alma Thomas hung in the White House!

A quote from the artist:

Here is something she wrote for an exhibition.

“Man’s highest aspirations come from nature. A world without color would seem dead. Color is life. Light is the mother of color. Light reveals to us the spirit and living soul of the world through colors.”