A Naked Baby Doll at the Check out Stand 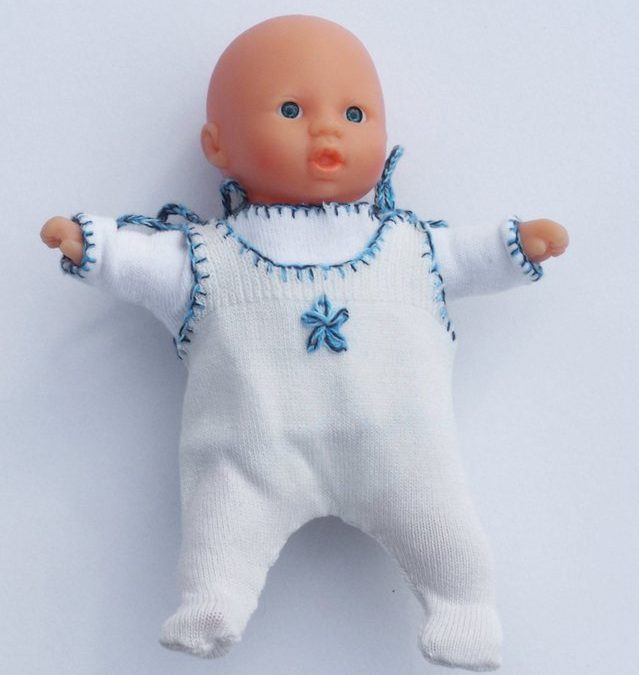 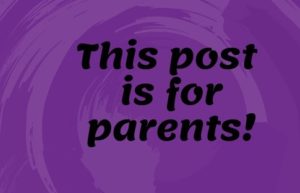 When my son was a toddler, he adopted one of his older sister’s dolls, declared it a boy doll instead of a girl doll and renamed it.

Despite the wide selection of clothes available, he preferred that his doll was naked. I was cool with all of that, so the doll, whose new name was Scrape, by the way, came along with us to the grocery store.

I had to shop quickly because this particular toddler of mine was not a good shopper. He liked to grab things off the shelves and knock them into the cart, or the floor, whatever, he wasn’t picky. I shopped fast, tried to keep things out of his reach, and checked out fast.

One day, we’d survived a trip to Whole Foods with no damage to the store and were in the check out line, my son and Scape in the cart’s seat.

The cashier was a man, and pointing to Scrape, he said in a deep and sonorous voice, “Uh, that’s an action figure, right?”

I can’t remember what I said. I hope I affirmed that no, it was a baby doll, a naked baby doll named Scrape, and that boys who want baby dolls can have them.

This was years ago and I still remember it, maybe because of how many times I’ve told the story, using my best deep voice impression.  And maybe because “action figure” is a silly name for a category of toy that’s basically a doll.

Ages ago, my husband and I saw a documentary and a dad, in the context of playing with his daughter, said to the camera,

“I’d like it to be known that I don’t play with the dolls, but I sometimes change their clothes.”

Whoa! Playing with your kid is such a threat to masculinity that he felt he needed to explain/defend himself?

I guess what I’m wrestling with here is this idea that things come up unexpectedly, interactions that catch us off guard, and we’re not always ready to defend, explain or enlighten.

The other night, we were at an event with extended family, at banquet hall. A distant cousin, who I really like, but don’t see that often, was telling a story about her two year old. That she went in to hug her daughter, but her daughter held up her hand in the “no” position and said, “No Mommy, SPACE.” My cousin said that it hurt her, but she didn’t attempt to hug her daughter.

I said, “What a wonderful way to respect her bodily autonomy.”

I wanted to say something to support her instincts as a mom. She and I may have been in the minority at that table, about kids, hugging and consent. So I’m happy that that time, if not back at Whole Foods, I got it right.

While we personally know at least three dads who are the primary caregivers of their kids, we may be unusually situated.

Since I was a kid in the ’70s and ’80s, options for girls have expanded a lot. Title IX passed in 1972, requiring that schools provide equal opportunities in sports for boys and girls.

The Equal Rights Amendment passed in a bunch, but not enough, states. No fault divorces became a thing. Women’s rights moved forward a lot, but the unfinished business of — well, there’s a lot of unfinished business of the second wave feminist movement — but a big one is an expansion of what men and boys can be.

Girls can wear any color, play any sport, wear dresses when the feel like it. Boys can wear pants and a rather limited selection of colors, judging by my recent shopping trips.

Girls’ domains have expanded and expanded, and they’ve even taken over boy’s names and last names as their own (and research shows that once a name moves over to the girls’ side, it never moves back, which is probably part of why we’re seeing so many Henrys these days.)

I don’t know how to solve all of that, but at least I can support my kids’ choices, and try to show them role models who are nurturing men.

Here’s a picture of the My Generation doll display, from a recent trip to Target.

I snapped a picture of these wonderfully diverse dolls, who all have jobs in STEM fields, based on their clothing and accessories. (Bee keepers and carpenter. They also sell scientists, and I think an astronaut.) 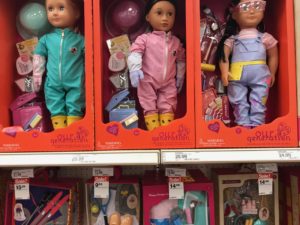 I was surprised, recently while doing research, to find that the term “Girl Power,” which I think of as very 1990s, is still very popular. And I just saw it on a T-shirt at a clothing store.

I asked friends on Facebook, what’s the boy equivalent phrase to Girl Power? One friend suggested “Boy Empathy,” it’s not very catchy, but I like it.